Less than a month to glory !

We hope that, like ours, your summer has been a blast ! Now that autumn is coming you hopefully still have some juice in you to create some amazing content! What kind of content you ask us ? Well anything you can think of, we will consider putting in the pages of the third Raging Platypus edition ! We offer you one to ten pages to be your creative sandbox !

You already have it ? Send it quickly here : ragingplatypus.magazine@gmail.com

We are impatient to read short stories again and see what’s hiding in your crazy imagination! Or maybe you want to tell the story a different way with a series of photographs ?

You are sad that winter is coming ? Raging about the latest political shenanigans of your country ? The will of writing an opinion piece of any sort ?

You have the soul of a chef ? Of a lumberjack ? Of someone who doesn’t trust the establishment and will do everything himself ? Share the recipe !
Yes it is time to produce amazing content !
Maybe you are a comic artist or an illustrator ? We would also be happy to feature your work !

Or perhaps you are none of the above ? You have something crazy in the back your head ? Something which would make no sense anywhere else, but you’re convinced it’s the next best thing in the whole wide world ? Just for a percent of the population ? Do not hesitate ! Send us your contribution ! 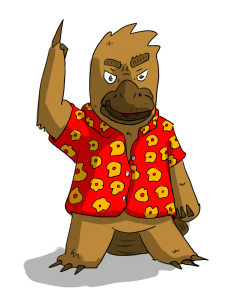 Kickstarter coming !
We are going to start a crowdfunding campaign at the beginning of October. For logistical reason we like the idea of using a third party platform to help us organize this project!

“Why would you ask us to send our contribution before October if we have another full month to do so ?”

Well we don’t want to be another of these endless Kickstarters with months of delay before the delivery of a product. We want the Kickstarter to be the end of the project and not the start. That’s why we would like to have most contributions in before we start the campaign.

First we are confident it won’t. Come on, have a little faith ! We managed to have two issues edited we ain’t afraid of the next one. Secondly, if in the unlucky case our Kickstarter project fails we would then explore other options such as scaling down and setup an old school pre-order system.

Of course it will !

We are all excited to receive your work and finally jump into action for this third edition!

Woohoo the Raging Platypus No. 3 is officially happening! We have reached our target!

PlatyParty to celebrate the third issue of the Raging Platypus!

The deadline is coming!