[Focus on] Animal noir by Izar Lunaček and Nejc Juren

Walking down the streets of bubbling Ljubljana, Slovenia, this summer I came across Striparna Pritličje – a little independent comic shop snuggled inside a bar, a quite convenient combination I thought. That evening, the shop just happened to be starting an exhibition with a local comic artist, featuring his comic series Animal noir. A gritty detective story with some 20’s vibes, it’s written by Izar Lunaček and Nejc Juren, drawn by Izar and published by IDW publishing.

The world of Animal noir is based on a cold and brutal society populated by savannah animals. Zebras and antelopes are the lower working class exploited by lions and other big cats, elephants are boxing gypsies, monkeys and hippos are the mobsters, whereas giraffes are politicians and detectives. The story follows the giraffe Immanuel (Manny) Diamonds, a P.I hired by his uncle, an influential judge, to find a tape made by his wife when she was young. In this universe “Prey fantasy” is the adult movie industry (“hunt porn”) and is about wild hunting, watched by predators who are forbidden to eat the lower herbivorous classes. The first four issues take us down the dark corners of the big Serengeti city looking for the missing tape. We follow Manny dealing with all sorts of characters, from mischievous hippos to religious freak gazelles and mysterious politicians.

Izar’s drawing style largely contributes to set the story’s noir ambiance. His cartoonish but hard lines with some simple and efficient color palettes add a claustrophobic sense, which makes the reader feel the tension in a city about to explode. This is my happy discovery of the summer and I cannot recommend it enough. If you would like to read the first four issues, they are available for a few bucks here from IDW publishing. 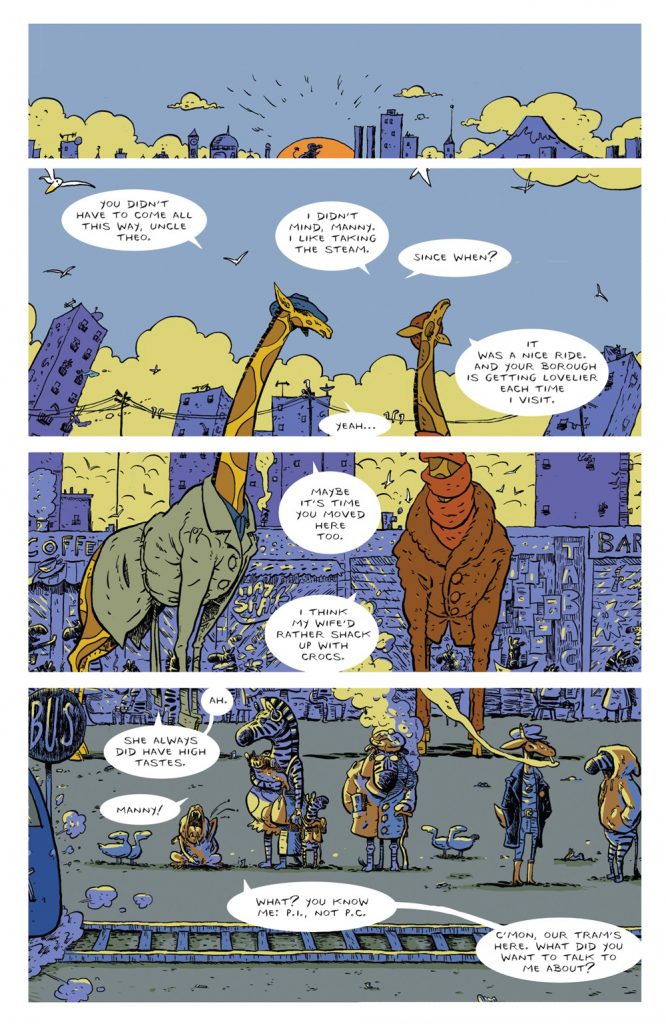 During the exhibition I met Izar and he was kind enough to agree to answer a few of my comic-fanboy-questions!

Adrien: Hello Izar, shall we start with a short introduction about yourself?

But of course. I’m a cartoonist and philosopher from the tiny capital of a tiny middle European country. A very relaxing place to live, by the way, if a bit stiff at times. I’ve been publishing comics and doing illustration work here for ages and have a number of books out in Slovenian but in the past couple of years I’ve been trying to get some stuff out on bigger markets too, both for the money and the opportunity to work and develop more. As for the philosophy part, I actually have a PhD in the theory of comedy, but the academic scene has been so uninspiring lately that I’ve almost completely retired from it and decided to focus on just drawing.

A: What is the comic scene like in Slovenia? What are the comics that inspire you and are there any iconic Slovene comics that you would say are a must read?

I love the new-wave French guys like Sfar, Trondheim and Blain but also old-school American classics like Herriman and Kelly and newer masters like Mignola.
As for our local scene, as little as there is of it, it’s quite lovely. We have diverse authors working in a range of personal styles and I feel the big figures from our history can hold up a candle to the world’s greats. Miki Muster, for instance, drew over 50 Carl Barks’ type anthropomorphic adventure stories during the 1950s and 60s and his brushwork is as good as Walt Kelly’s. Then there’s Kostja Gatnik who spearheaded the underground movement and is basically our homegrown Crumb. Last yet in no way least we have Tomaž Lavrič who was the first Slovenian cartoonist to win major festival awards throughout Europe: he’s best known for Bosnian Fables, a harrowing omnibus of short cuts set in the Balkans during the war.
The scene itself is nice but quite tiny: we are, however, all working hard to keep it as lively as possible, organising monthly get-togethers and an international annual festival centered around our comic book shop in the centre of town.

A: Where did the idea for Animal noir came from? What was the inspiration for the story?

I read somewhere it was impossible to do a comic about a giraffe, them being so characterless and out of proportion to other potential co-stars. Put them in a panel with a lion and its head gets cut off. Or show its head and everyone else spirals down to imperceptible dots in the depths below. Even if you chose to cast just giraffes, they’d still have tiny faces when shown in full. But, I thought, what if you took advantage of all that and made the giraffe a private detective who is supposed to be slightly aloft, alienated from his surroundings and mysterious? That’s where the basic idea came from.
Then, I sat together with Nejc who is a great pop writer in his own right (he produces fantastic short stories and witty song lyrics for his several bands) and we started discussing the fittings of the world for a towering P.I. to live in. We only included animals that make up a giraffe’s ecosystem in real life, as if all of the savannah’s inhabitants suddenly decided to found a society. Hence our story’s focus on problems like how to provide carnivores with meat in a civilized fashion and what the release valves for their consequently suppressed instincts would be.

A: In the four available issues, you and Nejc set up quite a universe. It seems that there is so many possibilities to expand the story of the different characters. I just saw that a fifth issue is on the way. Do you have any idea of how long Manny story’s gonna last?

Unfortunately, a fifth issue is not yet under way: what you saw was the collected trade paperback of the first four issues being announced. We have to wait and see how that one does in the sales and only then might a second series be greenlit. I really hope it does, though, since we, as you noticed, set up the world teeming with so many stories that just beg to be told in full. We have a huge batch of narrative set-ups on file in case either IDW or another publisher decides to pursue the series.

A: How did you get your comic on the American market?

Once Nejc and I had our universe set up, we wrote the first story arc and I drew and colored the first 15 pages of it, packing it all into a presentable pitch. This we then printed out and proceeded to assault with it editors at a number of festivals throughout Europe: Angouleme, St Malo, Barcelona, etc. The pitch was initially aimed at the French market but there was a couple of US publishers at the cons too, one of which was the first one to commit to the project, contract and all.
IDW is a really interesting publisher, by the way: they grew into a second league comic giant from zero in only 15 years, now sitting comfortably alongside Dark Horse and Image, but they did it almost exclusively with high quality entries in franchises like Ninja Turtles and My Little Pony that most self-respecting publishers wouldn’t touch. Having thus cemented a steady income, they are now branching out in increasingly author-oriented directions that include acquiring Top Shelf (one of the US’ top hitters in alternative comics) and printing a range of artist’s edition books etc. Interesting guys, especially Ted Adams, the CEO and founder. I hope we stay with them but if not, I really want to just make more comics so whoever offers to fund our next project we’ll jump at, either in the US or France.

A: Do you have any other projects coming up?

While waiting on the fate of a second series of Animal noir, I’m preparing a number of pitches for an array of American and European publishers. Some are in the same vein as Animal noir, thoughtful yet catchy comical thrillers (a cuckoo detective! Santa Claus fighting it out with his Eastern block counterparts!), some purely autobiographical (A kid hater’s guide to raising children!) and some based on my work in philosophy (The Holy and the Funny! Can they get along?). I’ll have to see which one bags a bite before I pursue one of them to the full.
And in the meantime, I’ll keep amusing myself with my blog (only in Slovene at the moment, sorry) that details my adventures as an author, traveller and father, plus a number of odd short stories I draw for the web and various magazines.

You don’t mess with the elephants here! 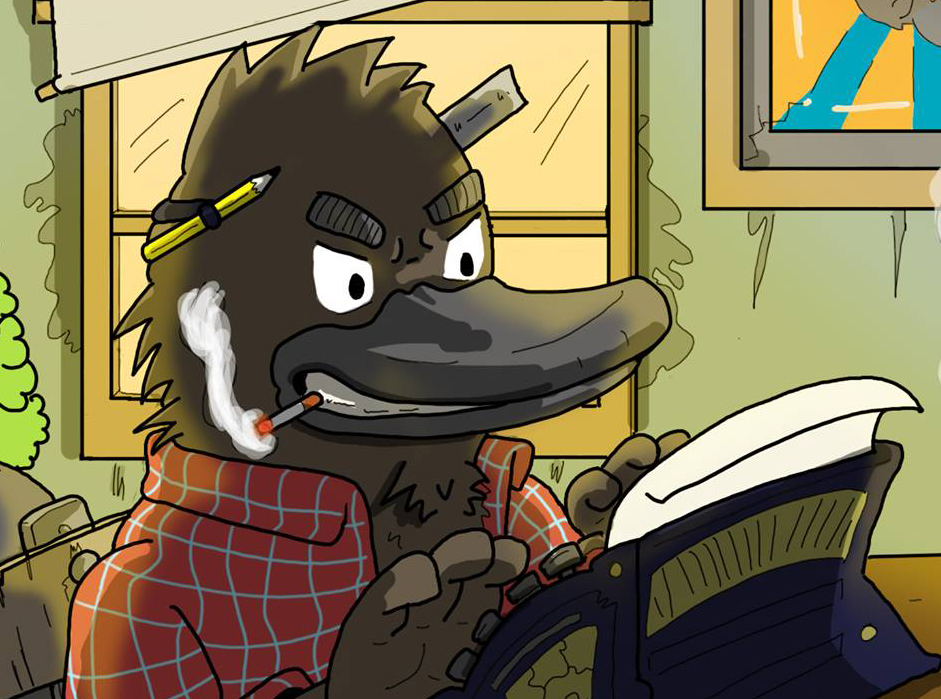