For me, and a lot of people, Bethesda is THE studio. They made one of my favourite games and I played it for hundreds of hours this past few years. For example, their RPGs have a lot of depth, detail and, above all, re-playability that a lot of their competitors lacks.

So, let’s see what they have for us this year with the review of the Bethesda Showcase.

It starts with a slideshow of the kids of Bethesda employees, a cuteness overload of kids with speech impediments. Apparently, Bethesda employees are surprise that they do the best jobs in the world. It’s an exemplary display of forced naiveté. They are making a big build up on the content of the press conference. Hopefully awesome thing are coming. 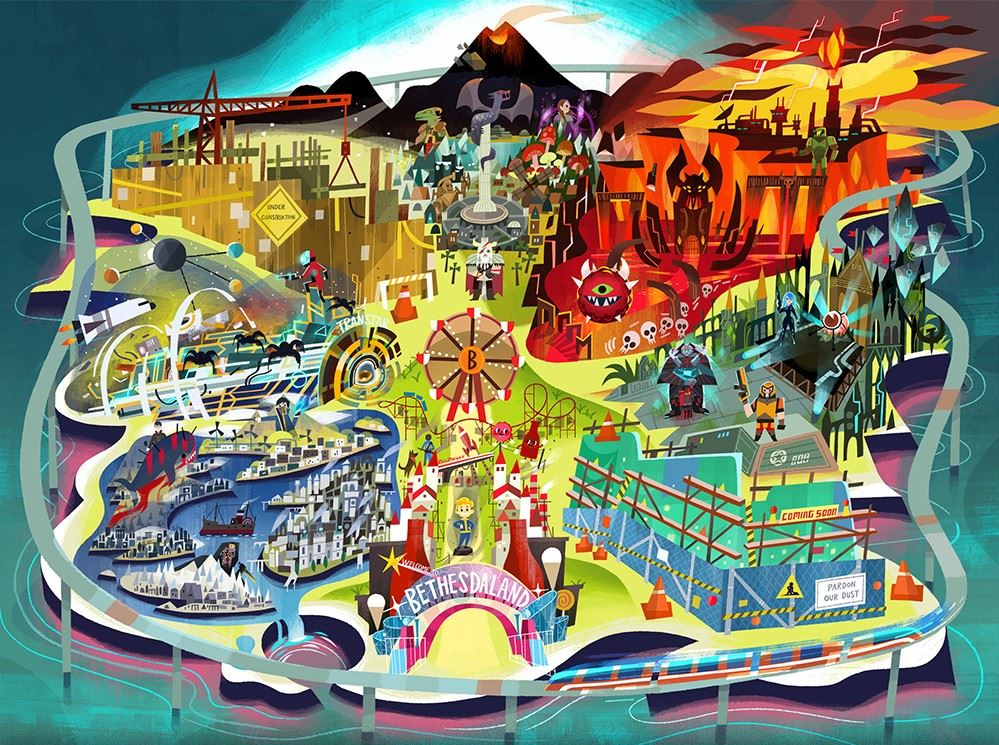 On stage the president of marketing and PR, Pete Hines, admits jokingly that the people are there for the open bar. Then he reminds us what games they launched recently with a rapid slideshow. Okay, it’s for the build up. Cool.

Surfing on the wave of Virtual Reality, Pete presents 2 new VR Games. An action horror title that looks a lot like doom. Okay it’s Doom VFR. A new adventure in the Doom Universe, where apparently you can play either a man or a machine with arms. Nothing much else to say on it as the presentation switched to the next game. Fallout 4 VR. Like Fallout but in VR. Nothing new under the sun apart from maybe some new craft. Cool.

For Doom VFR you can watch the trailer here, and Fallout 4 VR here.

And back to the … Streamers acting over excited for the new extension of The Elder Scroll Online. After some random quotes from random websites and people on the E3 stand, we are introduced to 2 new places in Tamriel.

You can learn what we know about them by watching the trailer HERE.

After a bit on mods history, we are introduced to the Creation Club. A platform aimed for working with and hopefully paying the moders. They’ll have to be selected by Bethesda, but their mods we’ll be available for all platforms without any problems on the saves or achievements in game. It’s still unsure if the mods are payed by the user.

The Elder Scroll Legends, TES card game, gets new content. Well new cards coming from Skyrim. As soon as the 29th of June 2017.

Everybody knew it, few people were waiting for it, but TES 5 Skyrim is coming on switch. Still nothing new apart from maybe the use of Amibos to get stupid skins, like Link. From Legend Of Zelda. Well it seems pretty fun to use the controllers to fight though.

If you want to see Link in Tamriel it’s here.

A pretty cool trailer comes next. Less than a year after the previous opus, Dishonored comes back with a DLC Dishonored: Death of the Outsider. Coming out the 15th of September 2017.

During the next bit, I couldn’t help but think about those sport ads, for products completely unrelated. You know the ones? Water bottle, shaving product etc. We are shown a new map for Quake Champion. But the main focus is directed around E-sport. The video shows the gamers playing as if they were imagined by someone who obviously never saw anyone play competitive game. The Quake world championship with a 1 000 000 dollars prize pool will be held in summer 2017.

You can watch the presentation video here

And Bethesdaland… You know what? I think we’ll never see the plateau again.

Then a trailer for a Horror game. In that order: Fantastic, noir, betrayal, family tragedy, redemption, white face, burning building, white goo, inappropriate music, time freezes, bird drowning in the white goo, a lot of fire, and white goo. Obviously, The Evil Within 2. Coming on the 13 october 2017. A Friday. Funny stuff Bethesda.

Bethesdaland still, and near the end?

Continuing with a very well-done trailer for Wolfenstein 2, starting with some live action movies, watched by a cat? The US have lost the war against the Nazis and are under occupation. The revolution is organizing. Very patriotic stuff. Live gameplay seems fun as well as beautiful. And it finishes with an acid trip. Well you have to bring some humour into it, hey?

He tells us that everything shown is out in 2017. And it’s the end.

Did you ever see that picture of Dewey from Malcolm in the Middle, where he says “I didn’t expect anything, but I’m still disappointed”? It was the most boring press conference of this year. The only true new thing, is Wolfenstein 2 thrown out there like “hey by the way, we were working on that, give it a look” and The Evil Within 2 about which we don’t know anything. The only thing more unnerving here, it’s that I had to watch this from home and couldn’t drown my disappointment at the open bar.

See you next time for the Devolver press conference.